You’ve seen this jacket before. Like when Lladybird made it, or Handmade by Lara Liz, or most recently when Closet Case Patterns made one up for their future sew along. You know what the Internet probably doesn’t need? Another Olive Green Twill Kelly Anorak. But you know what I say? Don’t tell me what to do. 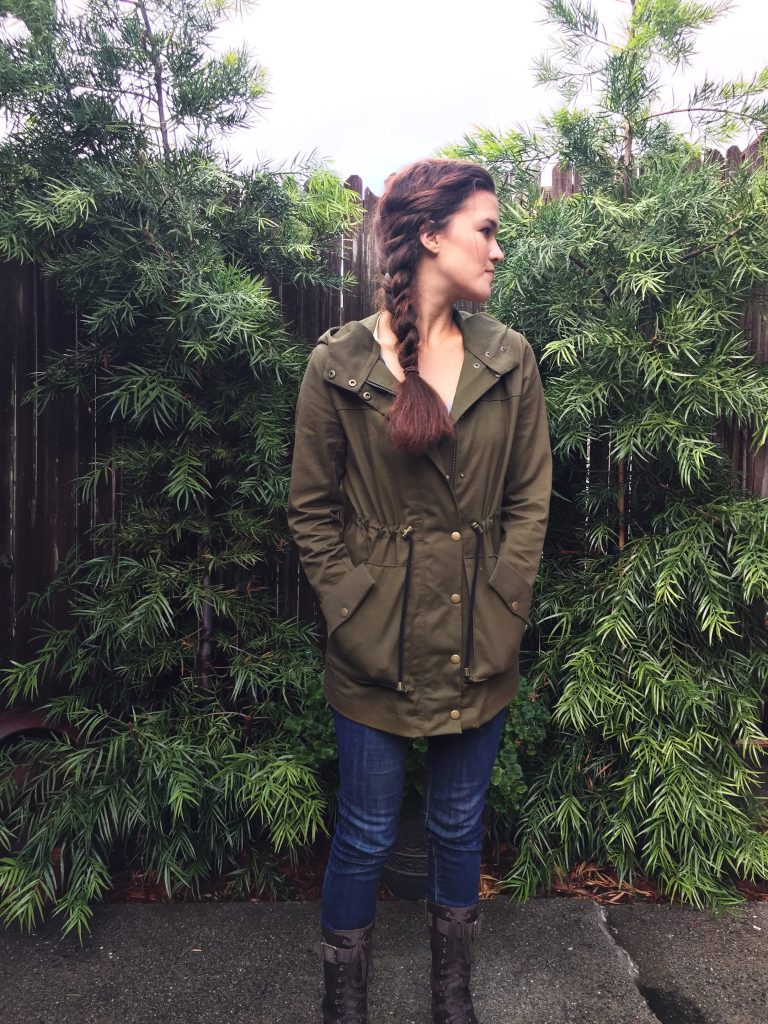 That’s right, you’re not the boss of me, internet. I don’t need that kind of negativity in my life. But I definitely needed this jacket. The only jackets I had before this were either too formal for work wear, not warm enough to be useful, or (in the case of my beautiful leather jacket) anxiety producing when it’s slightly damp outside. (Okay, I know that leather can get slightly wet and would probably be fine, but guys, it’s SO beautiful, and I’m weirdly protective of it). This is a great damp weather coat (winter here in the Bay Area is basically a mild drizzle), and perfect for wearing around campus at work. I’ve had this in my sewing cue for months and decided to add it to my Fall sewing plans. 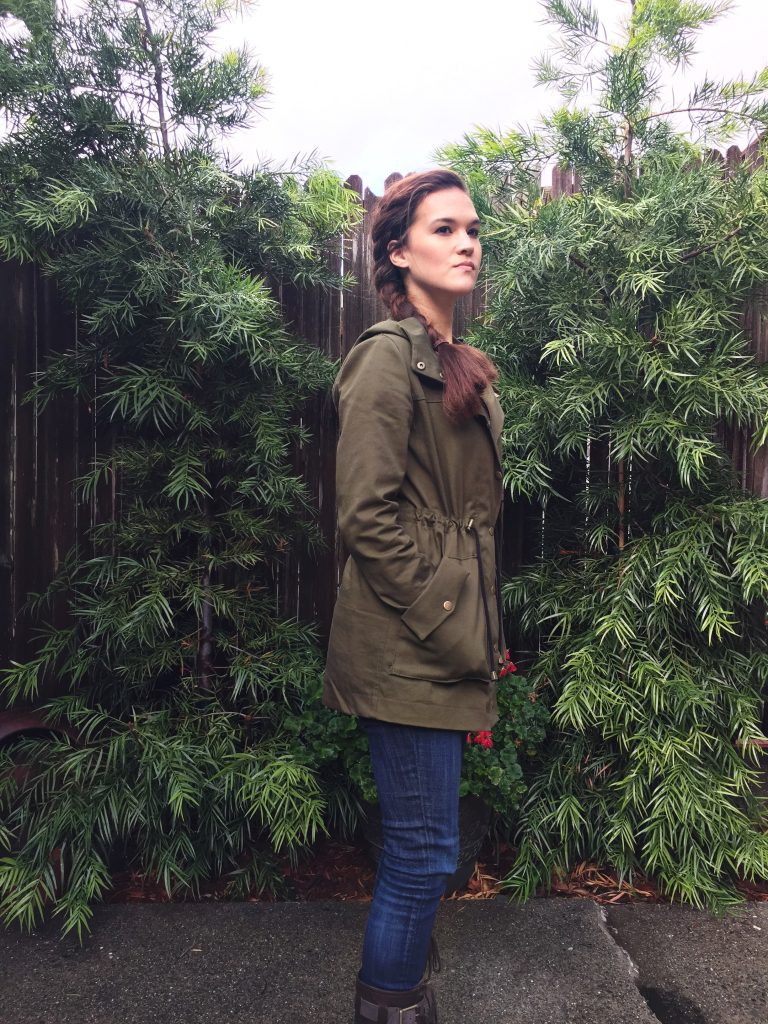 This is definitely the most complicated thing I’ve made so far. It took me probably 6-8 months after buying the Kelly hardware kit and deciding on fabric to muster the courage to sew this thing. All that hardware was so intimidating. But I shouldn’t have been scared. All those metal bits and bobs are actually pretty simple to put in. And they look so professional. 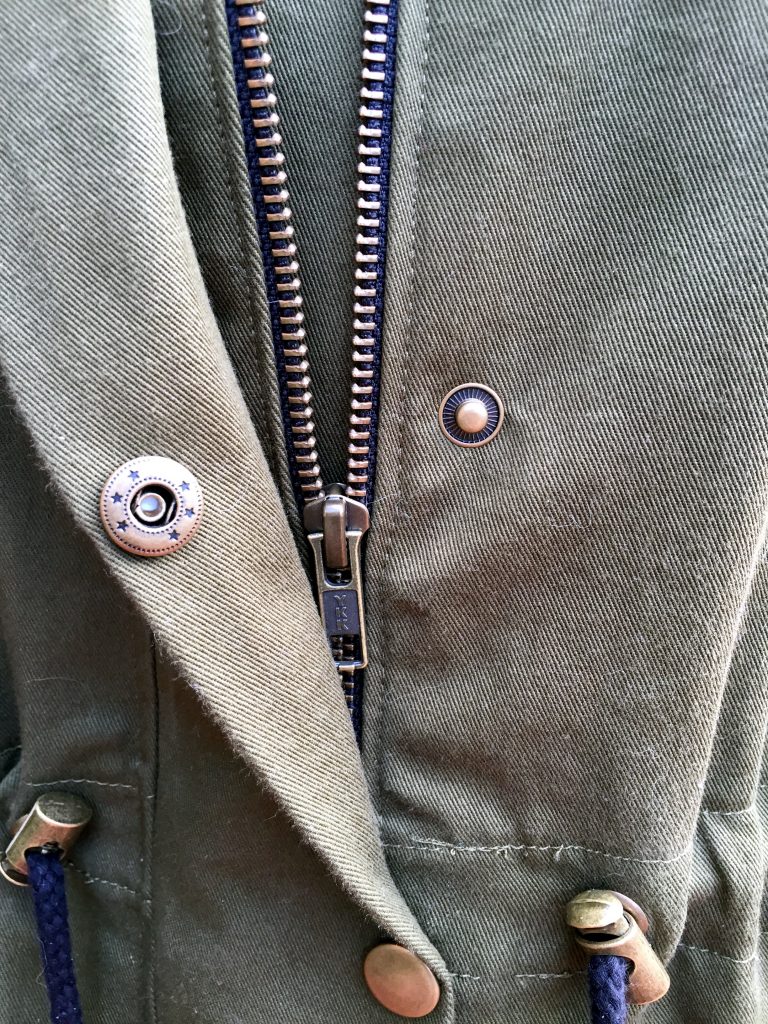 This olive twill from mood fabrics is so easy to sew with. It presses beautifully, which really helped me get nice crisp edges on things. I may or may not have 4 more colors of this on the way for gifts… 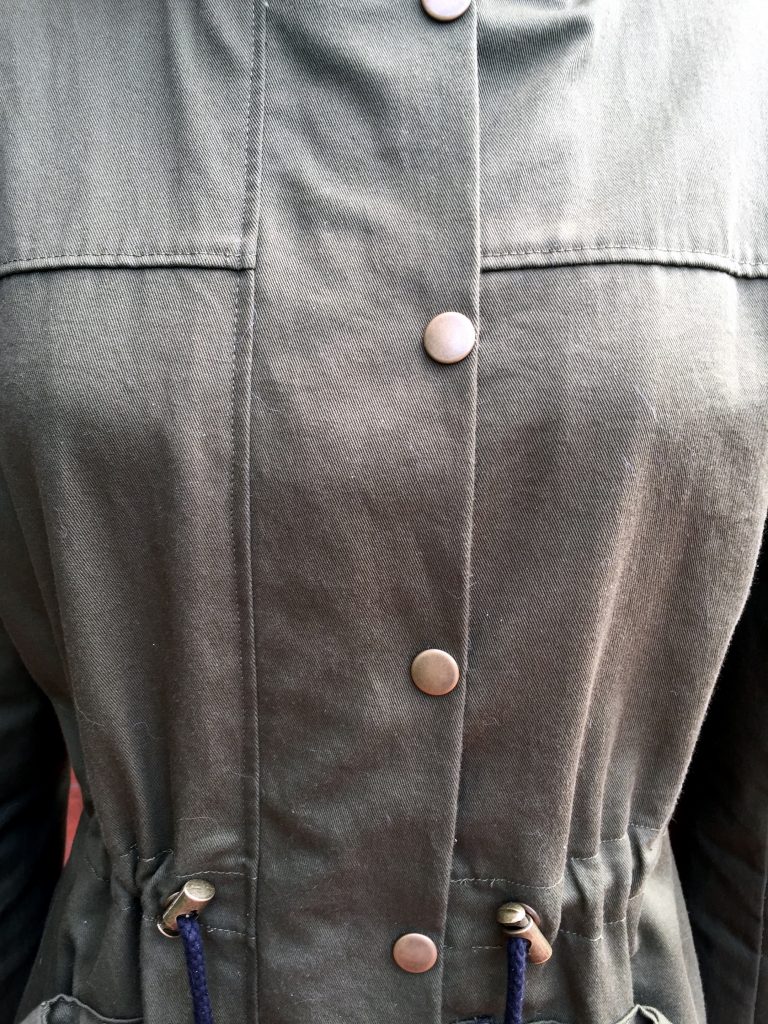 The majority of this was pretty straightforward to sew. For the zipper installation and the pockets, I used the closet case files tutorials, which are so much clearer than the instructions. Overall, I found their tutorials, especially the snap setting one, really helpful. I didn’t make any pattern alterations, except placing the drawstring at my natural waist. I also placed the pockets where they felt right for my arms. For the pocket placement, I completely ignored the pattern markings, so I don’t actually know how different my pocket placement is. 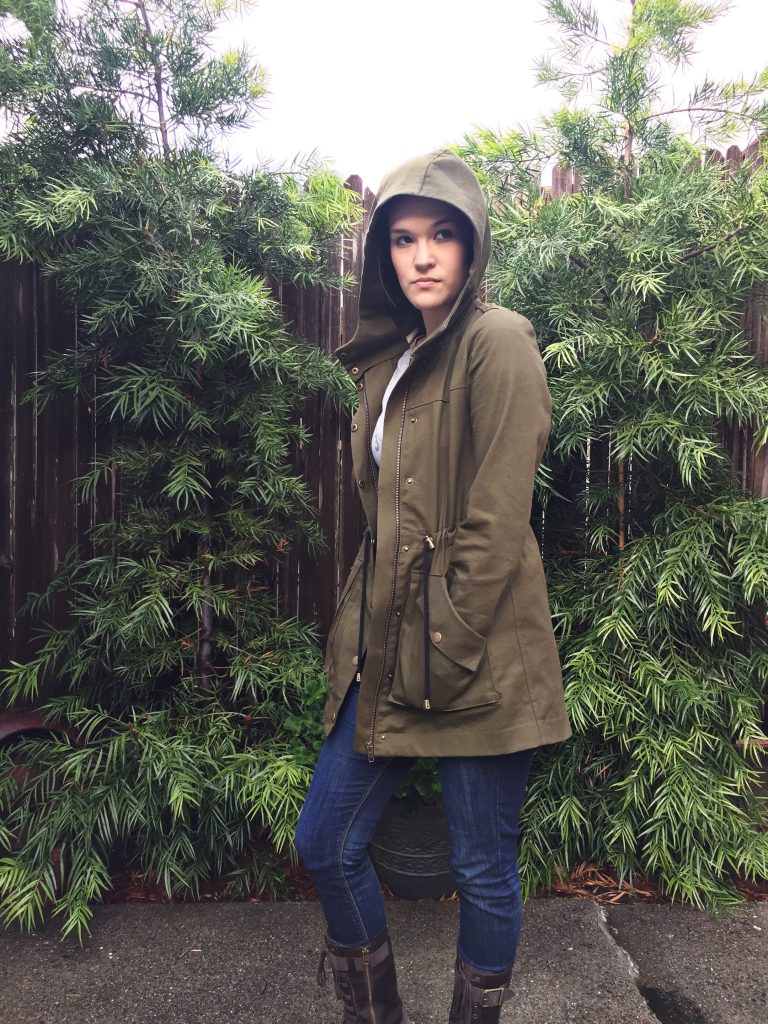 Can I just say that flat felling a curved seam, like the hood, is stupidly fiddly? Like, giving eye drops to my cat that one time was significantly easier than those damn seams (less blood though, so maybe a win?). I eventually got it, but holy sweet mother that was a pain. Hopefully I’ll get better with practice, since I have a few of these in the que for Christmas gifts. 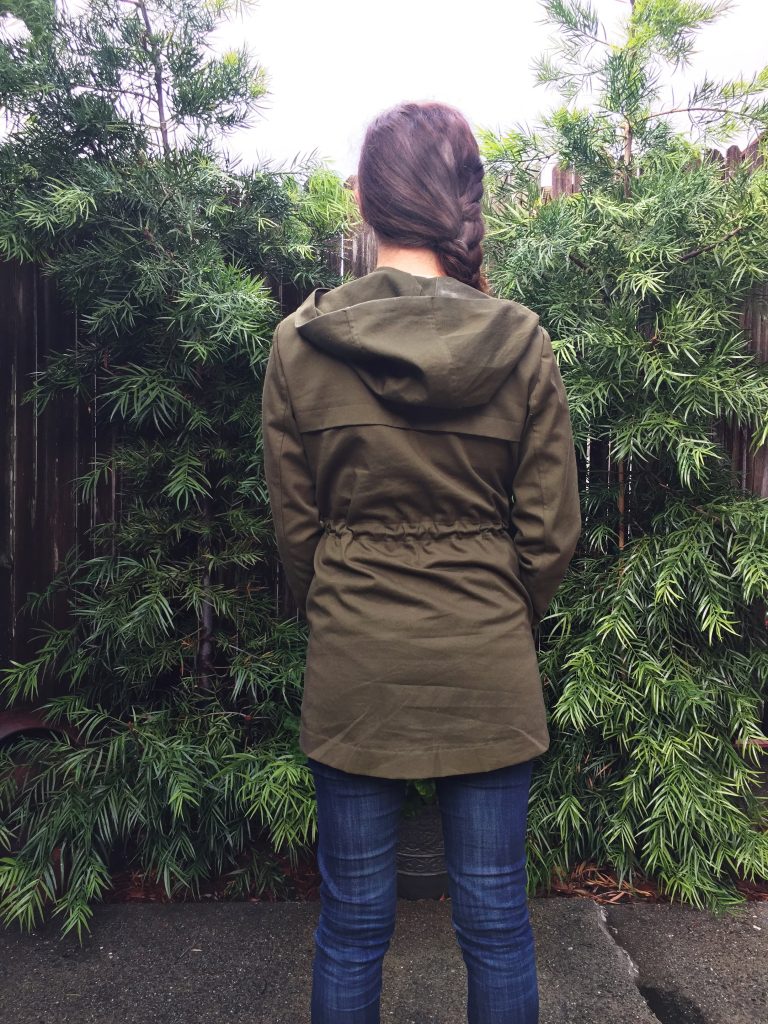 I don’t think I ever would have tried something like this on in a store. Usually, things designed for a slouchy fit look ridiculous and sloppy on my 5’3 frame. That’s something I love so much about sewing; I’m way more adventurous sewing than I am buying clothing. And I love the cut of this. The drawstring waist plays a big role in the flattering fit. I like the length a lot too. I thought I’d have to shorten it, since it’s drafted for 5’6, but I think it’s just right as is. 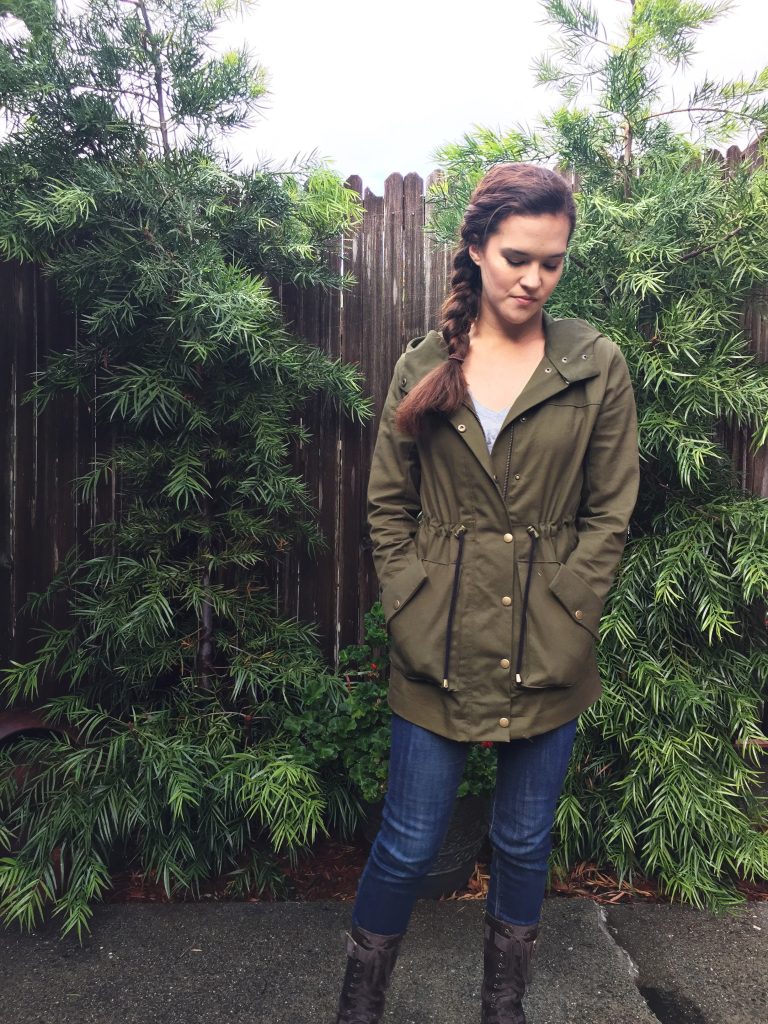 So far, I’m feeling pretty good about my fall wardrobe building. Generally, I sew more summer clothes than cold-ish weather clothes. Probably because dresses and skirts in pretty colors are fun. But that leaves me with a shocking lack of good fall clothing. This jacket fills a really big hole in my fall closet. I hope my next few projects will fill some more gaps too.

What was your last #sewingbrave project?